I made an earlier post regarding migrating my Windows 10 installation from a 2015 Macbook to a 2019 16 inch. I now have the new machine and have attempted to restore the image to a freshly created partition (i.e. I did not use Bootcamp assistant).

After the restore, I used the new feature in WC 8.2 to inject the Apple SSD drivers from the latest Windows Support files. This was reported as successful by WC.

The problem I’m having is that when I try to boot, I get a blank blue screen. This is not the screen that others have reported in the past, which is a traditional BSOD with the INACCESSIBLE_BOOT_DEVICE error. I don’t see any text, just a blank blue screen, so I’m unable to report what the error actually is.

Any ideas what could be wrong? 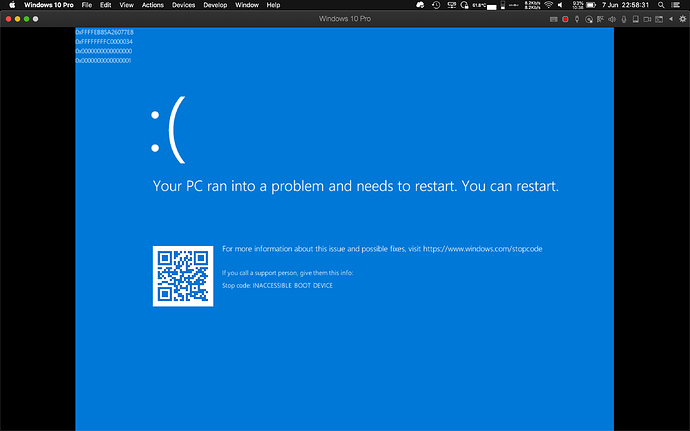 As per the screenshot, when I boot via Parallels, the BSOD actually shows. Seems like I have the boot device error, despite having injected the drivers via Winclone. What other things could I try to get this working?

Does the Boot Camp partition show up in macOS and does it look like all the files were restored?

Try booting to Recovery and disable Secure Boot. I doubt that would make a difference but would be worth a try.