I recently replaced my old iMac from 2008 with a new 2117 iMac.
I first purchasing that original 2008 iMac with “Jaguar” OSX 10.2 installed, and used Bootcamp to create a Windows partition (at that time is was Windows XP) which I was able to access either by booting directly at startup or if I’d booting into the Mac OS at startup I could still access Windows using “Parallels for Macintosh”.
In the intervening years I kept both the Mac and Windows operating systems up to date as well as “Parallels for Macintosh” (which had to be updated each time the Mac OS was updated).
Over time OSX upgrades took me step by step to “Lion” OSX 10.7 when I discovered that the version of iMovie I had been using was no longer available and its replacment did not do what I wanted. So using “Time machine” I “rolled back” my OSX to “Snow Leopard” OSX 10.6. Unfortunately that “broke” my Parallels for Macintosh but I didn’t have an appropriate installer to reinstall it because thus far I’d always merely updated from one version to another - so I approached Parallels but they were unwilling to supply me with an “out-of-date” installer meaning that I was left without any operational Parallels, so from then on I was only able to access Windows via Bootcamp at startup!
Then several years ago Microsoft announced that they were no longer going to support Skype for “Snow Leopard”! Remembering the problem I’d had previously, I decided to create a second OSX partition on which to install “El Capitan” OSX 10.11 retaining “Snow Leopard” for video editing. However doing that “broke” Bootcamp so I could no longer boot into Windows at all!
That is where things lay until I decided to purchase a new 2117 iMac with “Catalina” OSX 10.15. Upon taking delivery I used Bootcamp to create a Windows partition (by this time it was Windows 10) but I hankered to restore a Winclone copy of the Windows that I had previously on my old iMac. That Winclone copy used Winclone ver 3 which will not work on “Catalina” so I purchased a new up-to-date copy of Winclone ver 8.1
I first made and saved a Winclone copy of Windows 10 and only then used Winclone 8 to restore Windows XP which I’d created some years ago.
Although the entire Winclone process of both backup and restoration went seamlessly, when I tried to actually boot into WIndows at startup, I found I could only launch Mac OS regardless of which icon I clicked on during startup.
So I back-tracked and using Winclone 8 I restored from my newly created Windows 10 copy, only to find that it too would no longer boot! Again, regardless of which icon I choose during startup, all I can now boot into is Mac OS “Catalina”!
While I’m happy to “blast away” and rebuild my existing Bootcamp partition if that would help, I would like to understand why the process as I described above has resulted in my not being able to boot into Windows at all.
I notice that there have been a number of Winclone uses who have experienced a similar type of problem, but as far as I can see, none has been as the result of the path I have taken.
While I’d consider myself a reasonably competant “end user” of both OSX & Windows, I am by no means a computer guru, so references to “EFI” means nothing to me (other than those were my late father’s initials!)

What was the error message when Windows 10 didn’t boot?

Thank you for your reply.
No text error message appeared at all; when started up with the Option key held down, regardless of which “Bootable Icon” is selected, the iMac always boots immediately into OSX instead of Windows.
Also Windows does not show as an option in the OSX Boot Control Panel - just OSX.
Finally, FWIW “System32” is present in Windows in the Bootcamp partition.

I have the same issue and can only boot into windows using parallels. I would sure appreciate any advice.

Hello again. A lot of water has gone under the bridge since I first started working this problem but the good news is that I have manage to stumble upon a solution. However, along the way, it’s become increasing clear to me that different models of Macintosh might prevent some-one else following the particular path that I took.

At the core of the problem is that several years ago Apple started implementation of System Integrity Protection (SIP) on their hardware. Bootcamp Assistant apparently has the inbuilt capability to “navigate” around the SIP issue but it can only be used ONCE - the very FIRST time you create a Bootcamp partition on your HD - any subsequent action (such as using Winclone to restore a different version of WIndows) will result in it no longer being able to boot that restored Windows. And the “Catch 22” is that you can’t use Bootcamp Assistant assistant AGAIN except to “blow away” your entire Bootcamp partition and start over again (which I did - several times!)!

I suspect that my problem was exacerbated by my wanting to have read AND write access to my Bootcamp Windows from the Mac OS, for which I had installed “NTFS for Mac” by Paragon. However, the seeds of a solution were contained in something I found on the Paragon website which I’ll reference here…
https://kb.paragon-software.com/article/4797

That link is entitled “NTFS for Mac 15 - FAQ Mounting Issues” and contains a number of step-by-step “Solutions” including #9 - which describes how use Recovery Mode to disable SIP.

To quote from Paragon… "Apple macOS versions since El Capitan 10.11 have a security feature called System Integrity Protection (also known as SIP or “rootless”). It prevents 3rd party processes from modifying of certain system processes, files and folders regardless if they are launched by the root user or not. This mechanism is designed to avoid additional risks.

“In particular, these limitations are related to partitioning, as 3rd party applications are not allowed to modify partition map on the system HD. So, CampTune is not able to redistribute free space on the HD between Boot Camp and macOS partitions. Other tools, such as NTFS for Mac’s “Set as Startup” function cannot change system startup disk.”

So that’s the nub of the problem! It goes on to describe how to use the use Recovery Mode to disable SIP temporarily, then use NTFS for Mac’s “Set as Startup” to “bless” a partition to make it bootable etc, and finally reset SIP back on again to re-establish protection against rogue 3rd party products.

I hope that the above might help someone else, but I’m happy to report that I now have a Bootcamped Windows 10 which I can boot into either by using the Apple Startup Control Panel or by holding down the Option Key at Startup.

Hmm. That’s much more difficult than it might seem. On the face of it, it’s as simple as booting in Recovery Mode, Disable System Integrity Protection (SIP), “blessing” the Windows Bootcamp Partition using a proprietary tool such as the “Set as Startup” function in the Paragon “NTFS for Mac” and finally, re-enable SIP.
But what if (like me) you have an old 2008.1 iMac which didn’t come with SIP or Recovery Mode ex-factory? Subsequent OS upgrades introduced and enabled SIP but did not provide any means to switch it off again! I explained in my first post that I had replaced that iMac with a more recent one and the fix I applied was relatively straight-forward on that computer because it came with Recovery Mode. But as of right now I’m stumped as to what to do with my old iMac - apart from dumping it! It’s been suggested that I use Network Recovery Mode to access the tool required to switch off SIP. But my old iMac doesn’t support Network Recovery Mode!
And so it goes, caught between a rock and a hard place! Suggestions anyone?

When the Paragon “NTFS for Mac” application is launched, across the top of its panel are 4 icons, the right-most of which is labelled “Startup”.

Is the program in parallels or is it a separate program?

Paragon “NTFS for Mac” is a separately purchased application initially available to try for free.

Still having the same issue after installing Paragon

This is the message I got from Paragon

"Thank you for contacting Paragon Software Support Team!
I will be glad to assist you.

Please note that Microsoft NTFS for Mac by Paragon Software is only intended to provide the read-and-wite access to NTFS-partitions. It does not fix or directly affect the Bootcamp partition bootability." 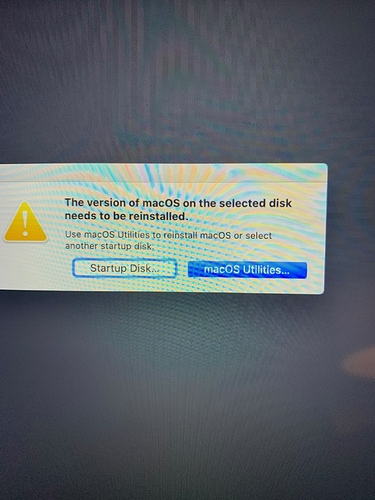 While in lock-down due to the Covid-19 virus, I spent a good part of today trying to make further headway in understanding the “ins and outs” of booting Windows on the Bootcamp partition of my two iMacs.
As already reported, I succeeded yesterday with my 2117 iMac, so today I addressed the problem of my 2008 iMac. I’m pleased to report a breakthrough of sorts; I have been able to disable SIP on that iMac even though it does not have a Recovery Partition! Having downloaded the Installer for “El Capitan” onto a 16GB USB Thumb Drive, I discovered that, I can boot onto that Thumb Drive and more-over by doing so I was able to disable SIP on my old iMac even though it has no Recovery Partition - something which I have never seen suggested as even being possible! Never-the-less, after a normal reboot, I was able to confirm that SIP was indeed disabled!
But as yet, even with SIP disabled, I have been unable to modify the Master Boot Record on the NVRAM which I believe is needed to allow my Windows 10 to again become bootable.
Now one puzzle is that while Windows 10 shows up in the OSX Startup Panel as being “bootable”, if I select Windows there and restart, Windows will not boot; instead I see this error message “No bootable device – insert boot disk and press any key”. Also, if I restart and hold down the Option key, Windows does NOT show as being bootable. So I seem to be receiving mixed messages when it comes my Bootcamp Windows being bootable.
One other bit of information I’ve gleaned - Paragon NTFS fo Mac loads different Bootcamp drivers than the standard Apple drivers. <At this point there was a Power Failure here! so no more today>

Anyway, I remember now that when I had my initial success booting into Bootcamp Windows on my new iMac, it was only after I had reverted to the standard Apple drivers. But the same trick didn’t work on my old iMac.
So far that’s all I know. I will only post again if I have any further news to report.

This is the final post I shall make on this subject! I have finally achieved total success in booting Bootcamp Windows on both of my iMacs - an old “2008.2” and a recently purchased “2117”.
I had a double stroke of luck this morning!
The first was in coming across a really excellent article written by a very knowledgeable person from TwoCanoes which is at this URL…
https://twocanoes.com/boot-camp-high-sierra/
That article explains just how Mac OSX and Windows have evolved in the way they handle the booting process - I recommend this as required reading for anyone who wants to know what’s happening “under the hood” of their Mac.
The second was in coming across a step-by-step guide written by Pranshu Bajpai which is at…


This mirrored what I was trying to do almost exactly, the only difference was that his Bootcamp partition number was 5 where-as mine is 4 - apart from that substitution, I blindly followed what he said to do with the result that now my old and new iMacs will both now boot into Windows under Bootcamp.
I intend to mark this item as “Solved”