Change in workflow sequence for 2.x?

I wonder there is a change in workflow sequence of mds 2.x at first boot as compared in 1.8+. The reason I ask is because I have to install a package which depends on the Computer Name to be changed. In mds 1.8+, it worked beautifully, i.e. the change of name happened before the package was installed. But in mds 2.x, though the computer name is changed after the completion of the workflow, the package config plist has somehow captured ‘MacBook Air’ or generic MacBook name instead, which tells me that the change of name is after the package installation.

I just looked and it only sets the computer name if there are scripts to be run. This was based on assumption that the computer name only needed to be set if scripts were going to be using it. However, I didn’t think about packages using it. As a workaround, you can create a pre-package script that does nothing:

echo “”
and that will force the computer name to be set. If you want it fixed in MDS in the future, file an issue here:

Thanks for your workaround, which I have quickly tested. However, I have found that the option “Before packages are installed when running workflow” (see attached) isn’t working and didn’t change the computer name.

The option “After first boot packages are installed” did work but not what I’ve wanted as the computer name didn’t get changed but the packages were installed.

Any chance of a quick fix on this. Thanks. 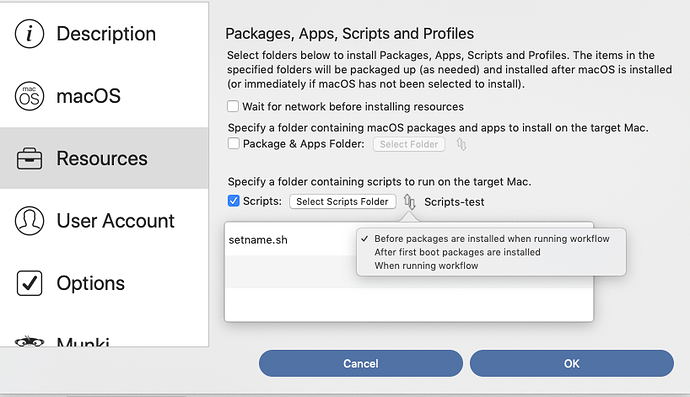