Ok so i have a 2tb SSD that i copied my mac stuff to. But as far as the windows side nothing but headaches and waiting. Found winclone and i like it. However, while i can create a backup of my original windows drive, I cannot restore it. I am on my third or fourth attempt each of which I waited about 20 hours. It hangs at about 30% where the computer runs terribly and freezes (used sparingly) while the hard drives dont read/write over a few hundred kb per second. And cpu is mostly inactive. It does not seem to be going well.

i am currently in windows trimming the fat to reduce size, defragging drive, checking & repairing (again) in hopes that helps. Although i am skeptical. Im bumpin into walls in the dark, man. Help me tim! Thx

Edit: a few more details: the image should now be
Around 75gb (95 before) going onto a 1tb partition… not sure if that matters.

Is this a Crutial SSD? What is the make/model?

Hi! Its a Seagate 2Tb Firecuda. 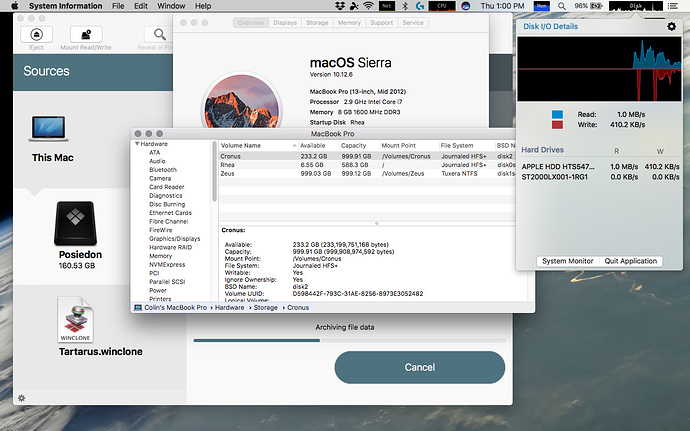 Also, should i expect the restore time to be comparable to the backup time? Im predicting this backup will be done within a half hour. (not-block based)…
…that was 6.25 hours for 85gb. So, I wouldn’t expect it to be more than 8-12 hours for the disk restore. just a guess though… please correct me if Im wrong as there is no mention of Expected durations.

Hi. Just a quick question… when you create your partition to restore the windows partition, are you using boot camp or the diskUtil? I had to do this some time ago and had a similar issue, I got round it by restoring the MAC side, then resized the drive using DiskUtil and created the size partition that the original image had, then formatted this as Fat32 not NTFS, then restored the WInclone to it. this worked, when everything else failed. Hope it helps.

I used diskutil. My most recent attempt worked after 2 days. The first attempt, there was something else going on that caused my computer to crawl to a standstill… and its happening again right now. So, problem now solved. Just have something new to deal with…