I have created a folder and put all of my widows PE files in it from a working SCCM boot drive that we use to boot macs into SCCM for imaging. When I plug the drive in it works. When I try to make a package from the winclone7 I get the following error on boot. Any ideas on what I can try to fix this issue? 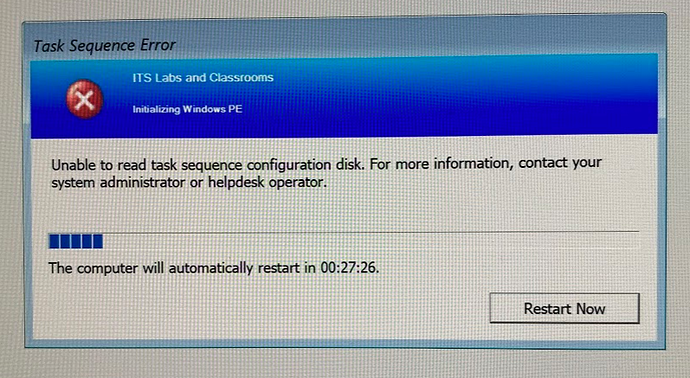 Did it work when trying against MDT? We are current seeing some customers having issues like this against SCCM built WinPE images and are investigating.

I unfortunately do not have an MDT Environment to test with only SCCM. I would love to get this working though if you need anyone to test it I would be happy to.

Any updates on this?

@tperfitt has there been any progress on this. We got the Winclone solution to work with MDT but that would cause us a duplication in effort is there any progress made on getting SCCM to work?

Not so far. The WinPE continues to have a “Fixed disk” error.

Hi - it’s the end of May and I did not see solution for the isse. I experienced exactly same problem.
At first I thought my SCCM Windows PE is at fault, but then I decided to created a bootable USB from WindowsPE - and it did work.
I contacted support (as we’ve got pro version) - but so far no one has contacted me. I belive problem is with winclone not SCCM.
If that the case - advertising Winclone as working with SCCM is at least exageration - as it does not work as intended.

Hope we can get a response from Winclone soon…

This issue is still not fixed for me either also looking for an update or an ETA.

There seems to be some difference between the WinPE that gets created by MDT and the one that gets created by SCCM. I was focused on finding out the difference, but it seems that the SCCM binaries on the WinPE media refuse to continue since it looks and sees that it is running from an internal disk (“fixed media”). When we originally did testing, my understanding was that the media created was the same which I believe is generally true, but the SCCM binary is working against us in this case.

I do have some folks using SCCM successfully with Winclone. I propose that we set up a zoom meeting with folks to discuss using it in their environment. I’ll touch base with the folks that have it working to set up some times. Please reply to this thread and let me know if you are interested. I’ll post back in a day or so once I get times worked out.

Very interested as that would help our automation greatly.

We now have a meeting set up to discuss. Please sign up here:

Register in advance for this meeting:

Welcome! You are invited to join a meeting: SCCM Discussion. After...

Welcome! You are invited to join a meeting: SCCM Discussion. After registering, you will receive a confirmation email about joining the meeting.

After registering, you will receive a confirmation email containing information about joining the meeting.

Was there ever any progress on this issue? I’d love to know what knowledge came from the zoom call. I’m currently trying to test this SCCM/WinClone workflow to see if is something we can use in our environment and I’m running into the same problem described by the OP.

I appreciate the link, but I’ve been through that workflow at least a dozen times with the same failure each time. I’ll keep plugging away at it.

Is anyone successfully deploying windows 10 via SCCM on 2017-2019 MacBook Pros?

I’ve been dissecting this workflow for months and I can’t figure out what I’m missing. Clearly there must be some tribal knowledge about SCCM that isn’t documented in this workflow. No matter what I do I get stuck with the same error as the OP.