Error when running from USB

I get this error when trying out MDS.
I built a bootable flash drive. Used MDS to setup the deploy folder on the the flash drive.
What am I doing wrong? 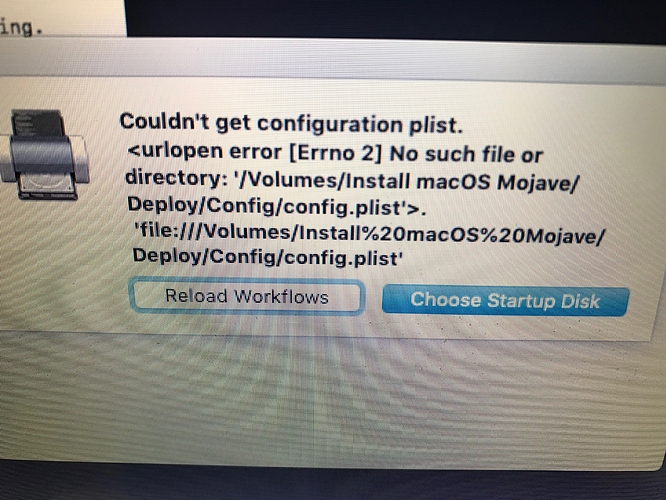 Turns out that when you boot from the install drive, the macOS installer partition is mounted as /Volumes/Image Install rather than the name of the drive. To fix this:

I must be doing something wrong. I boot to USB. I used MDS to create the bootable USB drive. Then I use /Volumes/Image\ Install/run and get the same error, but with file:///Volumes/Image%20Install in the path.

We do not have recovery partitions on the macs. Have to boot from USB with Mojave 14.4 installer app.

I believe your solution is here, and in the updated docs:

/Volumes/Volume Name/run does not work for us when on the same Create Bootable Volume and booted from it into the installer. Should it? Are we doing something wrong? We have lots of machines without recovery partitions, so we need to go external boot route. Tried with 10.14.4 If we install MacOS on a external (regular OS installation not Create Bootable Volume) and then MDS - Save to Volume, and boot into a normal OS, were OK. [IMG_20190419_164140985] Thanks!

@mike.henderson Did that answer your question? Did you get it working?

I so get a little farther now.

I get following in the attached screen shot. 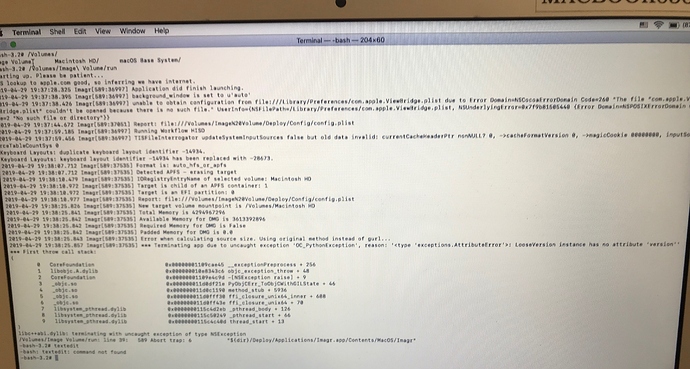 I believe this is resolved in a more recent version of MDS. Please update to 1.6 or later and see if that resolves your issue.

Now I get the folder with ?. There is no startup disk to choose after the workflow runs. The workflow is running but after the reboot, it does not continue.

What version of macOS are you installing? What kind of Mac hardware?

MDS 1.7 and later have better detection of configuration. Download here:

I had similar problems with USB but I was able to reliably slay them on several different Macs (desktops, laptops,etc.) of various vintage by: