I have an image created with Winclone 7 that won’t incrementally backup. It’s always worked in the past.

The associated Windows volume ID could not be updated in the dimage at /Users/… … Please check permissions and try again,.

How many incremental backups do you have? Is it possible to create a new image then try an incremental image to it?

This winclone file had no incremental backups. I’m 99 percent sure it was created in version 7. Still, I’ll start from scratch and see what happens. I live mostly on the mac so there is rarely a need to make a backup of boot camp.

I made a new backup using Winclone 7 this morning and tested it on another machine. It was a valid backup that restored well. I then attempted an incremental backup on that new file and got the same error message as before.

I’ve included that message as a screenshot. In the same screenshot I’ve included .the permissions I’ve given Winclone in Security and Privacy | Full Disk access. Is there any other place I should be offering permissions. 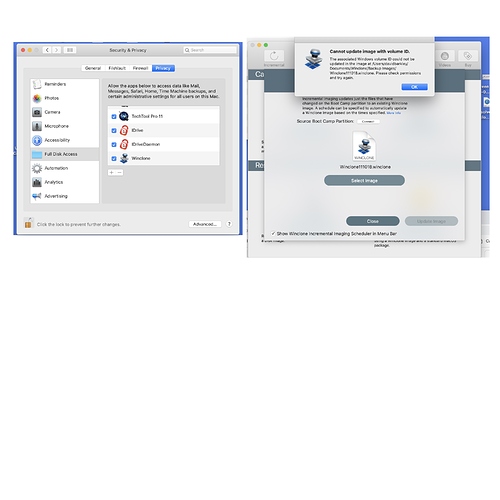 I had the same issue.
The program is giving the same error as atticus had.

Saved as my regular user ( not root ).
Than the incremental imaging starts working again.
I can not explain why, but it started working after I did this.

Strange. It sounds like it was related to permissions.