Coming from an earlier version of Winclone, I had to recreate a new image of my Windows 7 Bootcamp partition. This took a while, but the image was created succesfully.

I’ve decided to use the incremental update option, keeping a copy of the image as a backup. The backup starts at the scheduled time, but there are two issues I have.

The first one is that I immediately am presented with a warning that the volume is missing. Well, it isn’t, but it’s an internal HD that spins up slightly slower than the SSD. I think it would be better if Winclone would rescan after about half a minute and only then present a warning. This is only a slight nuisance, not much of a problem.

The second is more serious. The only progression I see with an incremental update is the following screen: 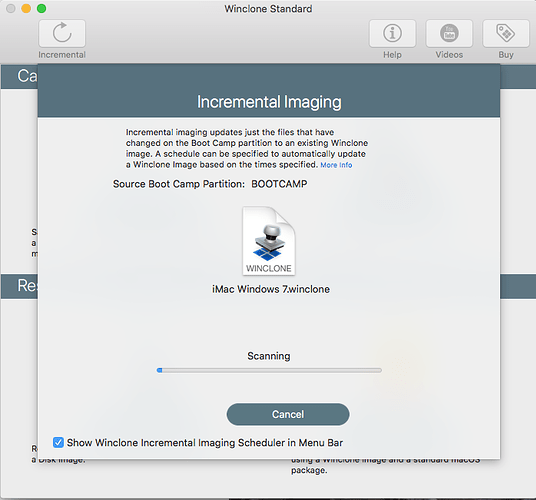 It just seems to be stuck at this stage. How much time is an incremental update supposed to take? Less than a full backup I hope?

Thanks for the feedback. The scanning can take a bit, but should be much faster than another clone.

What do you consider “a bit”? I’m talking in hours, not minutes, and the progress bar doesn’t seem to progress at all. If I check Console for messages, there’s a repeating TIC Read Status [6:0x0]: 1:57 error.