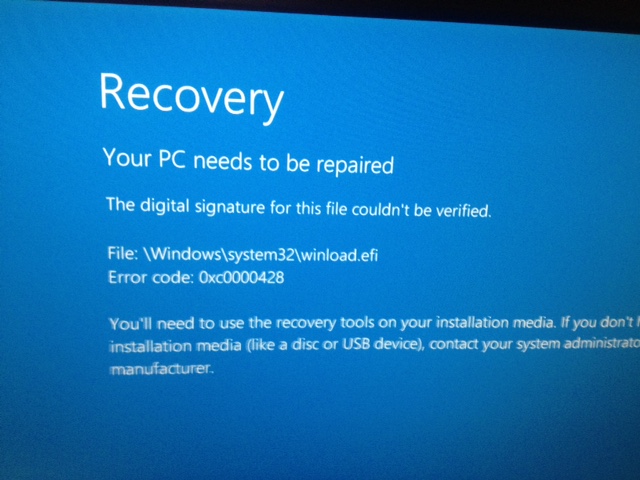 then I replaced older bootx64.efi (included with Winclone) with new one from installed Windows
works OK now
maybe someone will find it useful

This is super helpful. I was able to replicate the issue and have already incorporated a fix that should be included in the next Winclone update. Send me your address and T-shirt size to support@twocanoes.com and I’ll send you out a T-Shirt as a thanks!

This is a similar issue, but involves Parallels VMs of Boot Camp

I have spent 2 hours with the Parallels 2nd or 3rd level tech support. (They are great, by the way–even Apple could learn something from them, and Apple is good, too. As for Comcast/Xfinity, well, it’s too late for /them/ to learn anything. But i digress.)

I have used the Win10 EFI, inserting it into the Winclone app and replacing the EFI that was already in the app, and I can now import a Boot Camp image created in Mojave) into my OWC Aura 1TB onboard SSD with Catalina, having created a 120 GB FAT32 partition in Disk Utility. The Boot Camp now works perfectly in native mode, running from EFI, not Legacy Mode. No errors, no problems booting into it, updating Windows, etc., etc. I am running the latest public beta version of Catalina, 10.15.4.

However–there is no configuration of Parallels, latest version, 15.1.3 (47255), that will create a working Boot Camp VM with the imported Winclone Boot Camp. The Parallels tech guy tried everything, all HD options, all the NVMes and IDEs, including the use of some Windows commands , etc., but could not make it work. He would always get either a variation of the recovery screen shown above, or an interactive boot screen. He finally said that Parallels at this point does not support an imported Boot Camp, and that maybe later versions of Parallels would.

I have run a test version of a new Boot Camp installed using BC Manager in Catalina and using a USB Win10 install drive, and that works fine under Parallels. But there is no easy way to transfer the programs and files from my large imported Boot Camp to a new Boot Camp. (Or is there?)

It’s not clear to me what is the difference between a working, imported Boot Camp in Catalina via Winclone, and a natively installed Boot Camp in terms of the ability to create a Parallels or even Fusion VM (I tried that with a trial version of VMWare Fusion a while back.)