I just purchased and upgraded to Winclone 6 Standard in prep for upgrading to High Sierra with a clean install. I decided to move bootcamp win10 install (which I just fired up and tested with VMWare Fusion yesterday) to a 256 GB USB 3.0 flash drive.

All is fine except it has been nine hours and this is the current progress: 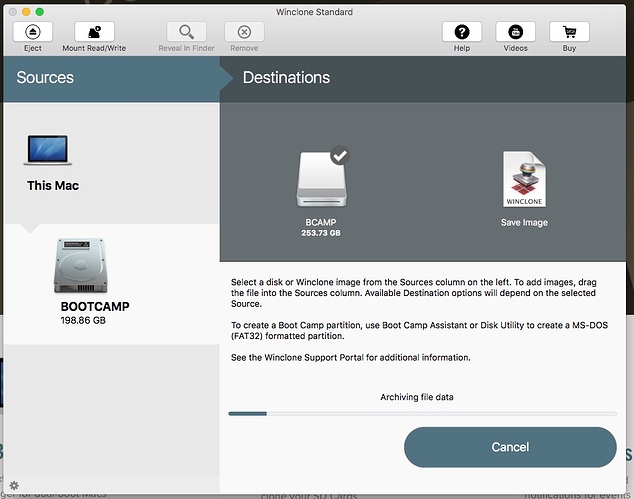 I’ll be patient even to the point of driving an hour tomorrow morning on battery with the USB plugged in awaiting if it comes to that, but something sure seems wrong especially since SuperDuper can clone 1 TB over night no prob.

If you switch to block based imaging, it goes much faster (in the preferences). File-based imaging seems very slow on non-SSD (spinning platter) disks. I believe it is related to the large number of files and access times.

I will try it. But, so that you know, I only have an SSD and I am copying to a USB drive (flash of course). So, I believe not relevant, but not certain since I am not familiar with what is happening under the hood.

Will report level of success.

The change to “block” rather than “file” did the trick but it still took more than 12 hours to complete. I would not have thought that long for 200 GB. Anyway, thank you.

The slowness might indeed be from I/O limitations. I tried to migrate directly from iMac to iMac over Thunderbolt and target disk mode. The speed was around 2-5 MB/s and about 600 reads/s when looking at Activity Monitor.

I cancelled and saved the image directly on the source iMac to its internal drive. The speed improved a lot at times going as high as 45 MB/s. Reads/s is over 1000, at times several thousands reads per second. I’m not sure how the OS calculates the reads per second value because this is a spinning disk no way capable of that high I/O.

Anyway, somehow target disk mode limits the I/O to a very low level. There might be similar limitations with external enclosures and USB controllers.

Interesting. I have had the experience with target disk mode going fast if it has an SSD. I wonder if there is a Target Disk Mode driver that is slow with lots of files on a spinning platter disk.

The second attempt was the same except the change from file copy to block copy. Process completed but took approximately 12 hours.

Partition was 200 gb going to 256 gb in both cases but with approximately 75 gb of free space in the partition.

Thanks for the assistance.