Restore an image to external drive does not start 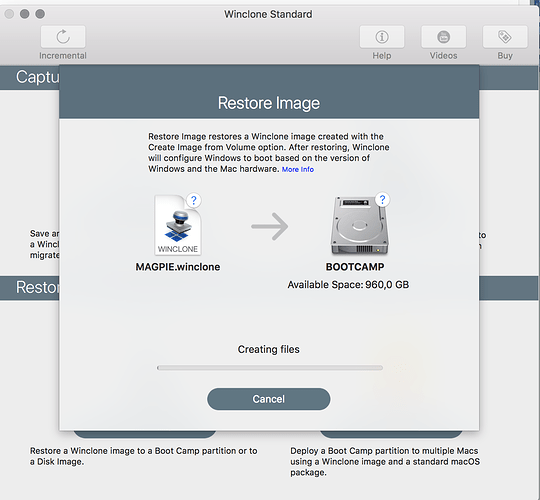 Restoring an image file to an external thunderbolt drive does not really start - it hangs in the state shown in the picture.

If you look in Console or Activity Monitor, do you see any CPU or disk activity? The creating files step can take a while for physical disks or slower bus speeds.

no CPU or Disk activity - it’s like it’s waiting for something. The Volume to restore to gets unmounted and than there’s the standstill.

BTW: it’s a MacPro and the external Drive is an SSD in a Thunderbolt enclosure.

Did a little more investigation on that.
I erased the partition to recover to and formatted with EXFAT. Still no visible CPU or Disk activity. On the Thunderbolt enclosure the activity LED has continuous light.
But now what I can see is that after cancelling the restore is, that the partition type is NTFS again and the directory structure has been created again - there are no files within that, though.

The enclosure and the SSD are O.K. since Windows on that ran flawlessly until I decided to restore a backup.

The problem has definetely something to do with the Thunderbolt enclosure - it seems to work with this but it’s so slow you will not even notice.
I moved the SSD to a USB-3.0 enclosure and it’s working better - but still takes HOURS to recover 300GB from a legacy HDD to the SSD.
The windows refused to boot afterwards also, but that’s probably some different thing.

Also , try switching to block-based imaging or saving / restoring an image. That should speed it up.