I have been a Winclone user for a number of years, and have always relied on it to create backups of my bootcamp partitions. However, since about version 8, image creation, even with the block-based option turned on, has become extremely slow. I was hoping the situation would improve in version 9, but sadly it has not.

I am running a 2015 Retina iMac with full SSD and 40GB RAM, yet a 150GB image from an external firewire mounted Macbook Pro 2018 I’ve been trying to create has been running for at least 4 hours and is not even at 40% yet. Before, when I used WIM, i left it overnight and only got to 5%. I am not running any anti-malware or anti-virus software, and am on the lastest (until this morning) version of Big Sur. Extremely frustrated to say the least! 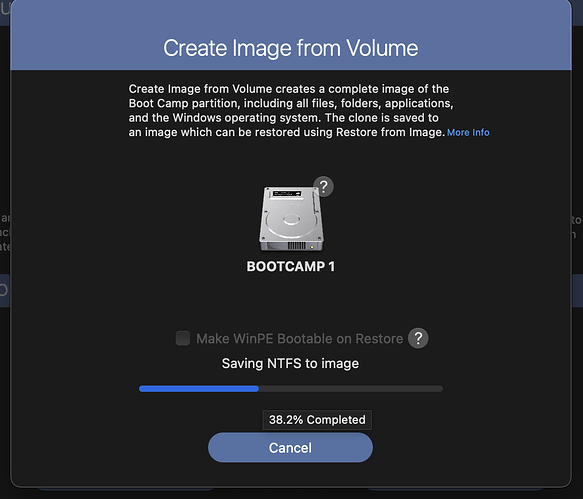 Before, with version 5 or 6, the same image would have taken 40 minutes at most on much older and slower hardware

You can switch to block-based imaging and it should go back to the same speed. If not, it is usually related to another process (endpoint security, antivirus, backup, spotlight)

No, I beg to differ…it is Winclone that’s extremely slow, not “another process”…I wish I had given up on Winclone after v8, when it took 6-8hrs to do an initial backup of a 400GB system partition (a task that takes about 2hrs with Carbon Copy Cloner), but hoping that Winclone 9 would finally get it right, I am now not even 30% through the same 400GB backup, after 4hrs…and that is going to a TB3 backup drive.

I am sorry to have to say this, tperfitt, but something is seriously wrong with this software, and it hasn’t been addressed in years…the excuse that it must be some other process is getting really old.

We will do speed testing here to see if we can identify the issue.

I just did some speed testing. I install Windows 10 on a 2020 iMac and created a folder with 10 large files in it. The partition was 125 GB and the total space used was 100GB. I then took a Winclone image of it using in both file and block mode. I timed creating the image and restoring the image in both modes:

I was saving to a Samsung X5 drive via a Thunderbolt-3 cable. It seems I am getting significant faster speeds than you are and am not sure why. I would like to result any speed issues, but I need to replicate the issue in order to effectively fix it.

I did a 120GB yesterday using block mode and it took in excess of 6 hours. WTF!!!

Just saw this. I think these programs (and that includes Carbon Copy Cloner) slow down a lot when there are hundreds of small files to be copied. If you have a 3GB file, it is sequentially copied and only requires one directory entry. Say you have a flight sim., with hundreds of scenery bgl files (or something like that). Each little file has to be identified, a space found for it, and directory entries have to be made. It’s going to slow things down a lot! So, when Tim did his speed test, he had 10 huge files - however, they are the easiest to copy quickly. Your Windows installation may have a few thousand 3KB files, for example. That will take time…

Nice point. Thanks for sharing.