Since my earlier post received no replies and was erased, I’ll post again. I have a working installation of Boot Camp that was transferred to my 2018 MacBookPro15,1 from an earlier MacBook Pro. In connection with moving the Boot Camp installation to the new machine using Winclone, I ran chkdsk and it reported all sorts of bad blocks on the brand new machine. Somehow, the move succeeded but the Windows system is hogging a huge amount of space on the SSD. When I check storage in Windows 10, it reports that system files are using 1-1/2 TB of space or something ridiculous like that. How do I solve this problem? I would like to finally receive an answer. There is nothing wrong with my SSD.

Can you post a screen shot of Disk Management in Windows? That should show what is being used.

Now I at least partially understand what’s going on here. When I first moved my Boot Camp installation to the new machine, I received lots of troubling chkdsk messages about bad blocks being mapped out. This made no sense to me given that the machine was brand new and Mac diagnostics showed no problems with the SSD, nor did I have any trouble using MacOS. Furthermore, as shown in the attached Win 10 Storage screen shot, “System & reserved” files are taking up almost the whole drive. This screen shows the BootCamp volume as taking up 1.81 TB total. Those figures don’t make sense – the total capacity of the SSD is only 2 TB. The Win 10 Disk Management screen shot shows the BootCamp volume as being 233 GB in size, 122 GB of which is free. This roughly agrees with Apple Disk Utility, which shows a 250 GB BootCamp volume, 131 GB of which is unused. The MacOS volume is 1.75 TB, of which 1.43 TB is unused. How does the Win 10 Storage report get to the 1.81 TB figure? No idea, really, but the MacOS volume is obviously included. OK, the numbers don’t quite seem to make sense but the overarching point is that drive space does not appear to have vanished. Sorry, the case can be regarded as closed. 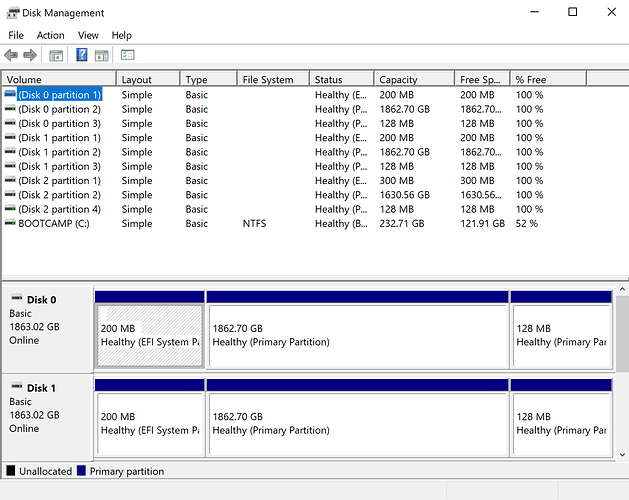 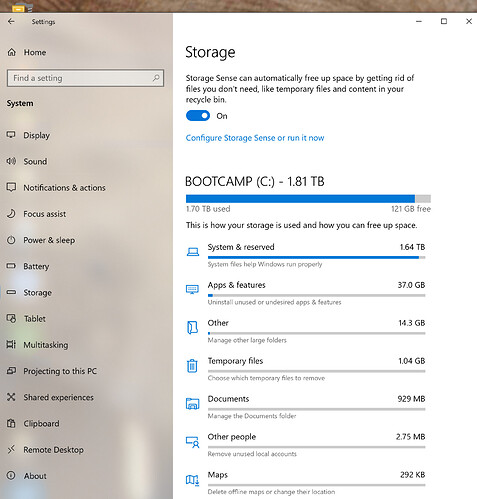 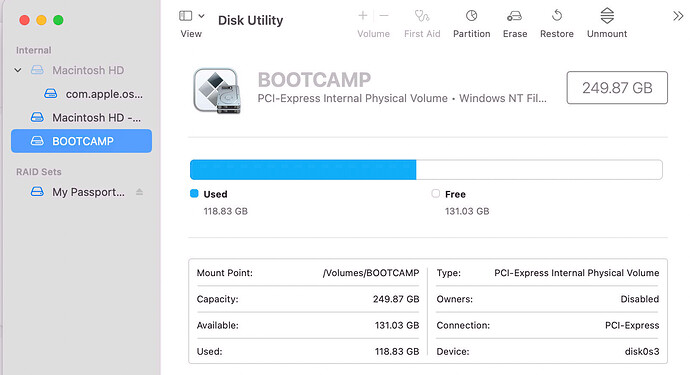