I want to clone my Windows 10 partition off my old Mac hard drive onto my new SSD. I cloned MacOS Catalina fine via a backup. But when I tried Winclone 8 and Volume-to-Volume it said:

However, I can no longer boot Windows. So my question is, what can I do?

Like the online guides state, I created a partition BOOTCAMP. But this new one is 500GB, the old bootcamp on my old hard drive is 150GB. Not sure if that affects anything. I asked this same question on Slack, but still have no feedback on this…

Another thing to try is to create an image and then restore the image rather than volume to volume cloning.

Okay Tim but what are you supposed to do when you get this error while trying volume to volume, and when trying to restore an image?

When the image is restored and Winclone detects that there are boot files missing from the Boot Camp partition itself, it attempts to mount the drive as read/write and update the files. If Windows was hibernated versus shutdown and the hibernation file was not removed prior to creating the image (and Winclone was set to not delete it in block mode), the restored partition may refuse to mount. You can see if the hiberfil.sys is at the root of the Windows partition by opening it in Finder and then pressing Command Shift . (period). You should see the hidden files; 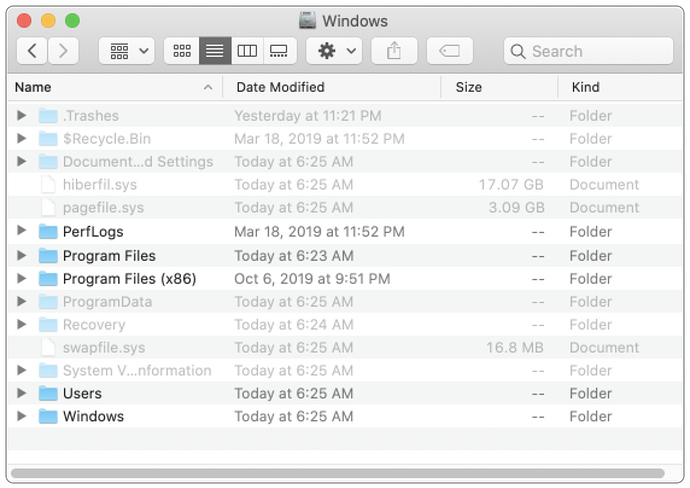 You can resolve this a couple of different ways:

Also, did you try and boot to it? When that error is given, all data is restored and Winclone is attempting to fix booting issues.