Ah - ok - step 5 of the ‘create the USB boot stick’ stuff addresses the above … it says that this can happen in a 2018 MacBook Air and potentially machines after that.

Tim, how about adding ‘Including the 2019 MacBook Pro 16 inch’ to that list of machines that need step 5 to be done… to save others having to do so much experimentation as I’m having to do…?

Alas, though, when I tried that USB drive again (from scratch)- - including step 5 - sadly, I see yet another failure mode on the journey toward bringing up a Dos command prompt (I haven’t even got as far as trying to inject the new drivers yet…)

So - to be clear, I went back and did all this again:

… including step 5 this time…

… And then I booted the USB drive.

This time the USB drive booted, put up a blue window saying "Setup is Starting’ and sat there for several minutes. No dialog box about not being able to install drivers this time… which is good.

… but after a few minutes, I got a different BSOD failure and system reboot - which is bad.

The failure mode this time (see attached image) is “DRIVER_PNP_WATCHDOG”

This is getting to be a bit…frustrating.

What’s the next step, Tim? Did this really work fine for you with a MacBook Pro 16?

It sure isn’t working for me… 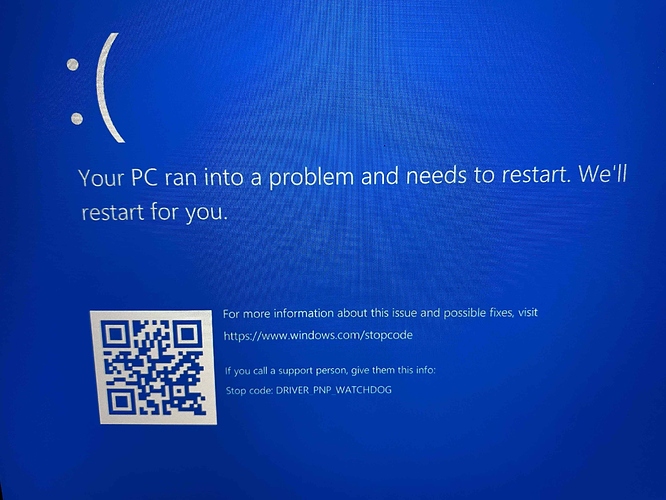 Resolution : Use Winclone 7.2 or later to restore the Windows image, install Windows the first time via Boot Camp assistant, or disable Secure Boot.

As it was mentioned as one of the solutions, I tried just installing a fresh copy of windows 10 through the Apple bootcamp installer and that works fine. I’m not going to restore an image anymore as I want to start with a clean slate here. But I could imagine that once it boots the new bootcamp partition it could now work restoring my old copy as I now passed the secure booth problem. Not sure but at least I have windows 10 bootcamp running on my new macbook pro 16inch. One step ahead. I will sure try to make a clone as a backup once I have it all set up. You never know. So I hope that will work.

I did now the following without success:

For me this USB Flash Drive process doesnt seem to work. Is there any other workaround or something I may missed?

So Jimmy when I understand it right you went through the bootcamp assistant and istalled windows 10 without cloning of your old staff on your bootcamp partition? But is that now the solution as this makes winclone useless?

Yes, I used boot camp assistant to first have it partition and install a basic setup. That works fine (since it’s totally not linked to Winclone) but it was mentioned as one of the 3 options to try before restoring a clone.

I wouldn’t say useless because it may be that restoring after a basic win10 installation works fine and you have what you want. Only, I won’t do it since I had some issues with my browsers in my previous windows (thank god there’s osx) so I prefer a clean slate after all. But I will use it then to make a backup so in case I run into new Windows issues (big chance I will some day) I can restore again.

Thanks Jimmy. I am not averse to installing a windows 10 keyless version that is not personalized and then using winclone 8 to restore into that boot camp install as I do not have the time to experiment with stuff any longer. Tim and others can you chime if it will work?

Aah so my data from my old macbook pro could be restored into that bootcamp installation with winclone so the result will be the same?

Hi Arun, I can understand… It also took me a while. Just fyi since the more we share here the more it helps us all, I was able to install this new windows without the need of a new key. You can choose ‘re-installation’ (if you have a retail license I read) and for the moment this new version and my old version that I can only get rid of once the re-install is complete both work simultaniously. So that allows me to transfer my data.

That’s what Tim suggests with his ‘Resolution’ options as he says Secure booth is the problem and suggests 3 options to resolve that. The bootcamp assistant was succesful for me but I don’t know if the winclone will succeed after that but it might as Tim directs (though you may need sysprep but you could try without and with).

It’s not that I use Windows so much, I just need it for one application so for the time being I’m still a little stuck to it… but I shared your feeling and frustration. Just don’t smash it and if you really want to, instead just send it to me

I did some more testing last night and verified that it does work for me. There is an issue where you can’t get access to the function keys to get into terminal, but it should work with an external keyboard. I found an alternative method that is pretty easy with VMWare. I’ll post a video in a bit.

I also think I have some things to try to inject the driver from within Winclone. I suspect that if I copy the SSD driver to the correct location and populate registry correctly, it may pick it up. This is the thread this is promising:

Hi, this posts describes which steps are necassary to add or repair a masstorage driver in an exiting Windows installation. If a Windows boot ends with a bluescreen STOP 0x0000007B INACCESSIBLE_BOOT_DEVICE, the system is unable to load a driver for...

So there are now 2 paths and potentially a 3rd one:

I’ll do a video now and post it in a bit here.

Cool cool. Tim do you think the thing with VMware will also work with Parallels? I have parallels.

Yes, it will be the same basic process.

Here is a rough video showing how I injected using VMWare Fusion and the drivers downloaded from Boot Camp Assistant for the 16" MacBook Pro. To avoid using a thumb drive, I mounted the boot camp partition as read/write and copied the drivers folder to the root of the C: drive. You could use a flash drive formatted as FAT32 and adjust the path and drive letter accordingly.

Here is the video:

What is now the process from a to z to implement easiest way a non t2 bootcamp partition into the new macbook pro 16? I would appreciate a detailled and clear description. If you feel that this will be to complex for a standard mac user like me than I would like to start to searching for alternative ways like contacting a professional it support.

Thanks and enjoy your day.

I now managed to get into the windows setup menu. I had disabled booting from external drives but had to set the security option as well to the lowest which was not described Tim?

Im right now in the windows setup menu where windows ask about language and Time format.
What I have to do now? From my understanding I would have to now rund windows command but the keys shift + F10 doesnt work and the command menue doesnt show up. But it seems that the keyboard gets recognised as I can use it in the menue for navigation.

Is there any help?

I made up notes for myself before migrating my windows 10 Boot camp partition from a Late 2013 MacBook Pro to a 2019 16 inch MacBook Pro. Posting it here before I do it to see if Tim and others can comment if I missed anything or doing anything wrong.

On the old Mac log into Windows do a sysprep (hopefully winclone details on doing sysprep are up to date). Shutdown windows.

On Old Mac boot into Mac OS. Run winclone8 and get a clone of the syspreped windows and store it into a macOS readable network file location that is accessible to both the old Mac as well as the new Mac. Shut down old Mac.

On New Mac open winclone8 and point to the network copy of the sysprepped winclone8 windows copy as source and restore to the fat32 partition that was created. http://twocanoes.com/knowledge-base/restoreimage-winclone-8/

On the new Mac use Bootcamp assistant to download windows drivers.

On the New Mac point parallels to the newly created windows instance. Hopefully there is no issue with this and it will allow a login even though it is a sysprepped version of windows. Tim others please chime in.

Follow Tim’s video (but use parallels instead of VMware) and copy and inject drivers into the windows partition. Inject T2 drivers using WinRE (Windows Recovery).

Try to log in to the new Windows instance.

then it started and everything looks like my old macbook all programms all data is here and all the special staff programed for our enterprise. everything seems to working right now. I will try it now out for a week and see if its now smooth and stable and also try to set the security settings back and see if it still boots up. So far im happy will keep you informed.